I’m starting this blog because I thought it would be a fun way to share my fitness/race journey. Too often I feel like the reason most people don’t get into fitness is because they see too many “Hollywood” type icons of physical fitness and the journey seems daunting. People may think they have nothing in common with that person who has already achieved physical perfection, so why even try. Or fitness may not look like a lot of fun, so why bother.

I am not an athlete. For the majority of my life, no one would have ever put my name and athlete in the same sentence.  I grew up loving books and playing video games. I enjoyed being outside and playing games with others, but never organized sports. The most organized games I got into where neighborhood 4 on 4 games of 2 hand touch football in someones backyard. I got through gym class in high school doing the bare minimum of physical work that was required, and never once even thought about joining a team. In most of jr high and high school, my exercise came from being the paperboy in my local area.

After high school I went to a trade school and took a lot of sedentary office-type jobs.  Lots of sitting around for 8 hours a day. Then I would either go home and play video games for hours,  or go out drinking. Lots of yuengling during those years and papa johns delivery.

Met my wife in 2005. Back then I was pretty much drinking several beers a day, smoking cigarettes, and living off of the closest fast food joints. I was obsessed with Mountain Dew. Probably drank 2-3 bottles a day. My physical activity was a big fat zero.

This picture below is me in 2011. I was close to 200 lbs. My shirt size was a L, sometimes XL, and my pants size was a 36. At this point I probably couldn’t run a block even if my life depended on it. 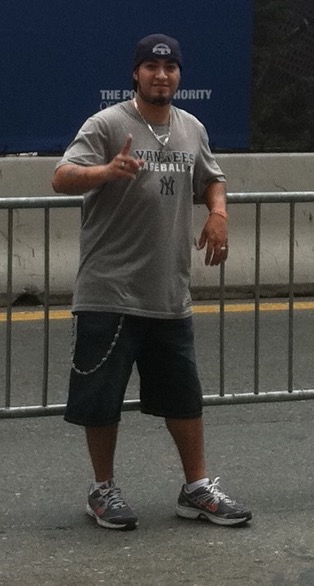 I don’t know when exactly it happened, but early 2012 I remember running up 1 flight of stairs and my heart pumping so hard it felt like it was going to explode. I remember thinking to myself, I’m only 31, why do I feel so old? I do nothing all day, why am I constantly tired and exhausted? A friend suggested I should maybe look into what I’m eating on a daily basis. So I downloaded my fitness pal and started logging my food. Was pretty amazed to find out I was eating over 3000 calories a day, and because I was sitting all day, I wasn’t burning anything off.

So the 1st thing I did was cut out all soda from my diet. Luckily by then I had already quit smoking so that wasn’t an issue. I also restricted myself to around 2000 calories a day. I’m a stats guy, so I kept logging my meals. I also downloaded a Couch to 5K app to get myself running. First couple days in the park where very humbling. I couldn’t run for more then 20 seconds without having to stop and slow down to a walk. My legs burned and I was sore for days after only going a mile or two. But I really wanted to lose all that extra weight. I didn’t really have a weight goal, but I knew the BMI for my body should be around 135-140. Had no idea if I could get there, but I really really wanted to be able to run a 5K without having to stop.

The Couch to 5K program was designed to make you able to do that in about 2 months I believe. It took me longer than that. I had to replay several of the sessions again because of not being able to complete them. I also developed plantar fasciitis in my feet which caused them to burn when I tried to run on them. So that slowed my progress. But I kept at it when I could run again and I was finally able to complete the couch to 5K program.

I completed my first 5K Sept 2012. I was not fast by any means, took me 30 minutes. I wasn’t even able to run the whole thing, I was gassed on the hill coming back and I had to slow down to a walk. But I finished and that’s all I cared about.

I signed up for several more local races and even enlisted my brother and several friends in them. I was really getting into the sport of running, even though I still wasn’t a great runner. I was going to the gym but mostly doing cardio work. Fast forward to the end of 2012. Between my eating better, no soda or fast food, and running regularly, I had lost about 60 lbs. I was down to about 135 but I wasn’t very happy with my body structure. I was skinny and wearing size M shirts and a size 32 jeans, but I didn’t look “in shape.” So I looked into some weight lifting programs. Was never a fan of weights but I knew that was a good way to build muscle. Also was taking a nutrition class in college to get some more insight.

In 2015 I was still lifting, still running. Friend of mine introduced me to the Insanity workouts. I thought, I’ve been working out for awhile how hard could these be. I was so wrong. Those videos kicked my ass! I hated having to do those videos but I felt so good afterwords. After I completed the 60 day program I joined a local boot camp class. It was there that I first heard the words “Spartan Race.”

After looking into Spartan races I knew this was something I HAD to do. So I signed up for a stadium race in April 2016. This is supposed to be the easiest race so I figured it was a good starting point. I also joined a gym called UrbanFit because they had lots of the obstacles to practice on and certified Spartan instructors to teach me. With their help I was fully prepared for my race in April. I finished it and was instantly hooked on the OCR culture. Saw lots of teamwork and camaraderie during the race and I knew this was something I could really get into. So I signed up for the Blue Mountain Sprint, the next level, with some friends. Then one of the guys at the gym said I should sign up for the super as well at Blue Mountain since it only comes around once a year. I completed both races and had an amazing experience.

So I was 2/3rds of the way to completing a Spartan Trifecta ( a Sprint, Super, and Beast race all in the same year) but I had no plans to do a Beast race. I didn’t think I could handle of it. But several people encouraged me to go for it, that I could do it. But because it was so late in the year, the closest Beast left was Killington Vermont, which is supposed to be the toughest Beast. But I signed up for it anyway, and after spending 7 hours on that Mountain, I finished it and completed my Trifecta!

Thanks for reading about my journey. If you have any comments questions or suggestions, feel free to let me know! AROO!!