The hills have obstacles 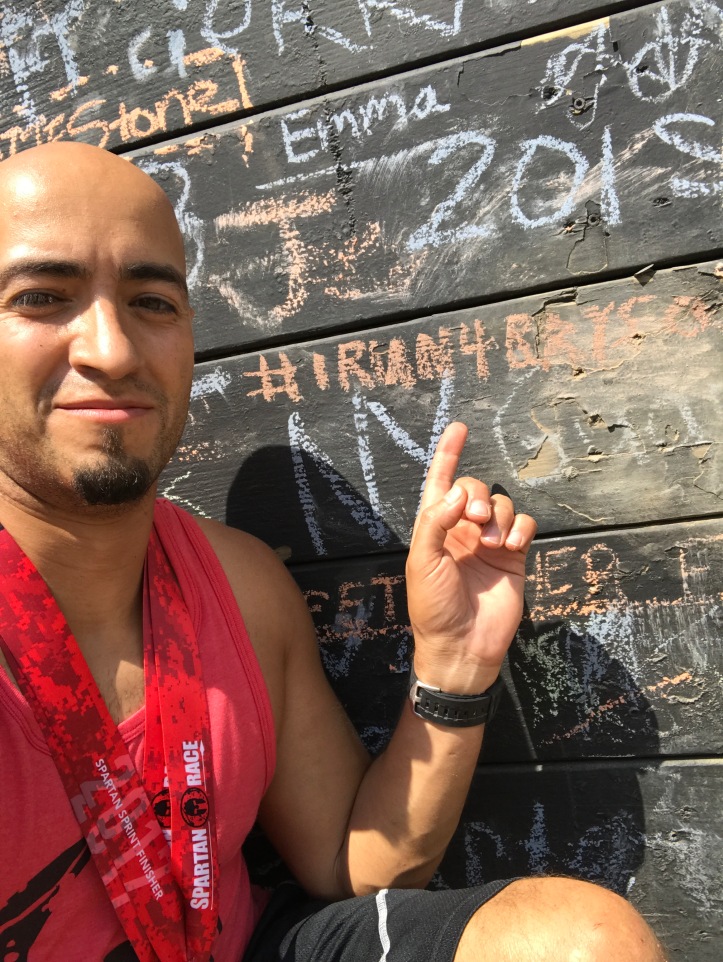 The hills are back! After racing at Ohio and Virginia, I was getting pretty spoiled with these flat, no elevation, Spartan races. So knowing that Tuxedo was coming up had me excited. I wanted to be prepared for the Super at Blue Mountain and I knew Tuxedo wasn’t going to be a walk in the park.

Got up around 4 am, grabbed my gear and a big breakfast. Headed up to the race. About a 2 hour drive. Not too bad. Parking was real close to the venue. Got to registration and pulled the trigger on doing 2 laps. I had already signed up for competitive so I figured why not do a 2nd “fun” lap. With a family wedding and other stuff coming up, I knew I wasn’t going to be racing again till July, so I thought why not take advantage.

Weather was beautiful. Probably 60 something at 8 and it got warmer through the day. Walked around the venue, stretched and jogged a little, then headed to my 8:30 starting corral.

So after Virginia I had purchased the FitFour Spartan Race gloves cause my current Under Armour gloves were useless once they would get wet. So I was excited to test them out at this race.

Starting ceremony and we’re off. Decent hill climb to start. Separated the group pretty quickly. Couple Up and Overs and Walls then running through the woods. Fairly technical trails but not nearly as many stumps and roots as Virginia.

Ran through some mud, then had to crawl under a cargo net. A cargo net above a huge puddle of mud and water. Fun stuff. So my gloves are already soaked and covered in mud. Then an uphill barbed wire crawl. Not fun at all! This felt really long and there was a lot of rocks to bang up my knees. Even being as short as I am, it still took me awhile to get through this, the wire was really low.

Rolling mud had a plastic tarp covering it, filled with muddy water. So it was easy to climb. Then the dunk wall. NOW I’m totally soaked. Climbed the slip wall after. Since it followed the dunk wall, it was pretty wet. The Ladder steps on the way down were pretty slick. Took my time with those.

More running up and down hills then my new arch nemesis: the spear throw. In class I’m usually pretty good at making it consistently. But in races, not so much. Missed it again today. So 30 burpees.

Ran through the woods some more. Plate drag was up. Usually not an issue but it was on a downhill slope. So pulling it back up was definitely a challenge. Had to get some good leverage to get it back to the top. Lots of rocks for it to get stuck on. Saw several people really struggle with it. Pulling it back down was pretty easy with the decline. Finished that then ran into the woods some more.

Down a decent decline to the festival area. Rope climb was up. Again my gloves and hands were wet and had mud all over them. But the FourFit gloves kept their grip! Was able to get up the rope, all arms cause I’m too stupid to learn how to use my legs properly. Really surprised how good the grip was, I didn’t slip at all. Rang that bell, grabbed some water then headed to Herc Hoist.

It’s funny how previously tough obstacles get easier. The Hoist was my nemesis at NJ. But again today, just like Ohio and Virginia, I had very little trouble getting it to the top. It wasn’t “easy” but it also wasn’t the monumental struggle it used to be for me. I’m going to attribute that to my training paying off.

Hoist conquered so I ran over to Olympus. Gave my arms a little bit of a breather, banged my shoes against the walls to get some mud off so I could get a good grip. Again my strategy with Olympus is: move as fast as possible, use only the hand holds and holes, and keep feet flat on the wall to support some of my weight. This has paid off for me at the last couple races and today was no exception. Flew through it quickly and smacked the bell.

Up another good incline and over the 8 foot wall. I can’t do the running jump most people seem to do. I just get to the base of the wall and jump straight up and hook the top with my fingers. Pretty tough cause I’m basically pulling my body weight up the wall with just my fingers, but it’s been working for me. Got over it quickly, then continued up the hill.

Black sandbag carry. This carry was pretty rough because it was up a decent ascent and some fairly technical terrain so it was hard to do it quickly. My neck and shoulders were not liking it at all. But I was able to power through without stopping. Dropped my sandbag off and climbed over the inverted wall. That’s one of those obstacles that can be tricky and I’ve seen people struggle with it, especially if they have problems lifting their weight with their hands. But with my training it’s become pretty easy for me.

Ran down a steep hill, back to the festival area, and to the burpee-maker: Twister! This obstacle always seems to be a struggle for a lot of people. Especially if u have short arms, the transitions are tough. Also you have to almost wait for the handlebar to come down to you. A common mistake people make is trying to rush through it, and that ends up throwing their momentum off, which has them end up hanging and eventually falling off when their arms give out. I try to keep my arms bent, legs up, and a good swinging motion. I face it forward instead of the sideways method. Again, I knew the gloves were going to be tested and they didn’t fail me. Got through the transitions, was in the last set and I started to hang. Arms were tired. But I had enough strength to pick myself up and continue the last couple handles and hit that bell.

Walked up the hill past a ton of people doing burpees, feeling pretty good that I was able to beat Twister. But that good feeling ended quickly when I got to the bucket brigade. Luckily it wasn’t a long one but it took a lot out of me like it usually does. Had to stop several times. But I finally got through it.

Multi Rig was next but it was all rings. Arms were pretty tired from the bucket, so I gave myself like 60 seconds to recover. Didn’t want to chance failing this obstacle. Starting swinging, got near the end, and I somehow missed one of the rings. Had to be patient and wait for the momentum to swing me back. Was able to recover and finish the obstacle. The volunteer smiled and said she wasn’t sure I would make that! I just grinned and said “no problem” even though I knew I had come pretty close to failing an obstacle I usually dominate.

Only thing left was to run down that hill and jump that fire!! Felt really good. Put in one of my best Sprint times of an Hour and 20 minutes. I was able to get through the whole race with my only failure being the spear throw! Coulda had a perfect race! Ugh!!!

2nd lap was more of the same. Since it was Open it was much more congested. But I wasn’t in a hurry and enjoyed some conversations with fellow Spartans. Some of the obstacles got really congested.

Again I can’t praise the FitFour gloves enough. Even on the 2nd lap I still had tons of grip with them and I conquered all the obstacles AGAIN, only failing…..the damn spear throw!! Ugh! Coulda had 2 perfect laps if not for that. So I know what I need to work on.

Tuxedo was a blast and probably the most challenging Sprint I had done this year. Of course I’m sure Blue Mountain next month will make it look like a cake walk!

Thanks again for reading my posts! Please subscribe to this and my Instagram to follow my racing journey. As always I welcome questions, comments or opinions. If you see me at a race, please say hello! Love meeting Spartans! AROO!!