This past weekend was one I had been looking forward to all year long. Blue Mountain is basically where I started my OCR obsession, and it’s also the closest Spartan race from where I live. It’s only a 20-30 minute drive, so it’s practically in my backyard. I had ran the Super and Sprint here last year, and remembered how hard they were for me, so I was looking forward to seeing how I could handle the hills after a years worth of training.

Race start time was 8 am Competitive. Up early, had a big pancakes, eggs, and coffee breakfast. Headed up to the mountain. Parking wasn’t a big deal that early, but the lot was kinda far from registration so it took about 10-15 minutes to walk there. Got registered and signed up, chatted with some people. The weather decided to have some fun with us and it started raining around 730. But it didn’t last long, mostly drizzle and when it came time to start it was clear.

Starting Spartan announcements and then we were off. 8 am was the first competitive wave and it wasn’t as packed as I’m used to seeing. Races starts up a pretty good incline, so it quickly separates the pack. Up a bend and another hill then 2 hurdles. No big deal, up and over. Head into the woods. Climb over one wall, go up a ways, then over 6 ft wall.

Now the climbing begins! Up and up and up some more. Felt like it would never end. Tried not to look up cause that just makes it worse. Just one foot in front of the other up that hill.

Get to the top of the mountain, and climb the cargo frame. Drop down on the other side then had down a pretty steep slope. 7 foot wall at the bottom, then back up the mountain.

The course map says atlas carry but there was none for the Super that I remember. It was there for the Sprint though.

Here Hoist followed. Wasn’t a big deal really. The ropes looked brand new and the pulley was pretty smooth so the sandbags went up fast. Brough them down slow, then was on my way.

Down the hill, then through a creek of rocks. Some fun trail running was had here. Glad I had my super grippy Saucony shoes, some people were wearing running shoes and they were regretting it at this part as the mud was super slick and the hill was steep.

Out into the sun and to the rope climb. Like previous races I stop and take a breath for 20-30 seconds then leap up that rope. All arms, I don’t even bother trying to use legs anymore, especially with how good the grip is with my FitFour gloves. Fly up the rope, ring the bell, then climb slash fall down to the cushions.

Down a small hill then the plate drag. Seemed a little heavier than normal. Maybe cause of the rain. Got stuck once and had to pull it out. But no big deal, pulled it back to the stake then dragged it back. It’s funny how that obstacle used to kill me. It would blow out my arms and spike my heart rate. Now it’s something I can do easily in every day training. Just goes to show what consistency and hard work can do. Makes things that were hard, easy.

Speaking of hard, Olympus was next. One of my favorite obstacles, probably because I’ve only failed it once, in Nj back at the Beast. Since then I’ve nailed it every time. Had a little extra motivation this time. One of my friends was volunteering at Olympus and was taking pictures. So I knew I couldn’t fail! Kept my feet up and my arms strong and quickly moved through it. Gave the bell a good smack and my friend a high five!

Back up the hill a little to my arch nemesis: the spear throw. Just have not found a consistent throwing mechanic for it, and today was no different. Point sailed up. And didn’t stick. 30 burpees, and the refs were diligently watching so I made sure to count every one.

Up the hill some more to the multi rig, another one of my favorites. This one had 3 rings, then a long bar, then 3 more rings. 2 surprises though: the ring right after the bell was a good distance away, and the bell was also hung higher then usual. I had to get a couple swings from the bar to get enough momentum, and even when I got to the last ring, I had to almost leap off to touch the bell. I barely hit it with the top of my fingers. Was a nice challenge and a switch from what is normally a routine obstacle.

Small lattice walk after that, down a hill then over the A frame. Back up another hill, then the farmers log carry. Way too easy of an obstacle in my opinion. You’re carry 2 logs like 30 feet, turning around and bringing them back. Takes all of 10 seconds. Would like to see maybe more distance or some kinda change to add more difficulty.

Sandbag carry was next. I can’t say I recall every being disappointed with Spartans race structure, but this time I was. Since we were in the Competitive wave, we were told we had to carry 2 sandbags. The men’s sandbags are 40lbs each. The hill was pretty steep downhill so it was slow going. My arms were hurting, but I kept moving. Going uphill was a different story. Felt like I was only getting a couple steps, when I would have to put them down. At this point I notice people start to breeze past me. I’m like whoa they’re Beasts! Then I notice they only had 1 sandbag!! A couple people around me start saying hey you guys are wearing competitive bracelets as well, why are you only carrying one sandbag. They said they were told by the people up top to only grab one since the sandbags weren’t coming back fast enough and they were running out. To me that’s total BS, you don’t create an obstacle that you don’t have enough supplies for. Especially since most of the competitive racers are trying to get good times to earn points. Having to carry 2 sandbags was bad enough but it was pretty demoralizing watching people I passed earlier now walk by me. Was kinda funny cause some Spartans actually legitimately felt bad about carrying one and where offering to carry 2 up. But that wasn’t happening, as most of us were too prideful to give up the 2nd bag. I know I was like screw it, I’m bringing both these sandbag back up! Hopefully in the future Spartan either has more sandbags or doesn’t do double sandbags in the competitive heat, so everyone has the same race.

So after blowing my arms out carrying 2 40lb bags up a hill: monkey bars! This is another one of my favorite obstacles, but my arms were not looking forward to this. Had to rest for about 30 seconds. Scouted the obstacle. There was a transition in the middle where u had to go from the lowest bar all the way up to the highest bar! So I knew I was going to need some momentum. Got started and I’m 2 bars in and I get bumped by the guy next to me. Luckily it wasn’t hard and I was able to keep my grip (those FitFour gloves are game changers). Got my momentum and swung myself up to the top then back down and to the bell. Gave it a hard smack to let out a little frustration then headed across the mountain.

Tire flip followed. The volunteer said flip it over once, then flip it back over, then you’re done. Easy. The tires they had looked really small. Didn’t seem like a big deal. But when I went to lift it, it wouldn’t budge. I got into a low squat and had my hands underneath it but I couldn’t get it high enough to where I could use my knee to push. Very frustrating. So I headed over to do my burpees. Found out the tires were over 400lbs, more than 3 times my body weight. Guess I know what I need to practice!

Z wall followed. It was fairly dry so it wasn’t much of an issue. Bender was next. Kind of a fun obstacle. Backward pull up bar followed by an up and over. Trickier then it looks if u can’t pull yourself up without your feet. Saw someone fall really hard off of it. But I didn’t have any issues with it.

Down the mountain then up a wall and over the lattice. Always forget what that obstacle is called. Another big wall followed then rolling mud hills, 5 in a row. Then a swim followed. Across the pond, under 3 sets of tubes, then more running through the muddy woods.

Around a corner and to the Ape hanger! Now last year when I raced, I couldn’t even get up the rope to the ladder. So I was determined to get it this year. Climbed the ladder, and grabbed the first bar. Started moved access using both arms on the same bar. No swinging. The bars were really slippery and even wth the gloves I wasn’t sure I could make it if I started swinging. Made it about halfway and my arms started screaming at me. But my 2 friends who were with me cheered me on and it kept me motivated. Grabbed the last bar and smacked that bell good. Fell down into the water and gave a big Spartan yell!

Climbed the stairway to Sparta then headed to the dreaded bucket carry. This carry was looooong!! Not as steep as the one at the NJ beast but it felt just as long. Arms were not happy at this point but I got through it albeit very slowly.

Barbwire crawl was next. Mostly grass luckily but it was pretty long. First half was downhill so it wasn’t bad. Then you had to climb a slip wall. But the second half was uphill. Much harder. Couldn’t roll. I’m not much of a roller anyway, rather prefer a controlled crawl. Plus it seems like people who roll can’t control it, as I’ve gotten kicked in the head numerous times by people who roll. Today was no different. But I shrugged it off and kept going.

Up a short hill then on to twister. I’ve had a lot of success with this obstacle, it’s been a couple races since over failed it. Was moving along pretty good, got to the 3rd section and the one bar was really slick. Didn’t expect that and wasn’t able to recover. Slipped right off. Very frustrating especially considering the finish line was in sight. Banged out my 30 burpees, now 90 total for the race. Headed down the hill, under the dunk wall, then over that fire jump!

I didn’t finish with a very good time. Took me 4 hours 12 mins. My goal was 3:45 so I was well short of that. The carries seemed to really drain me and hold me back. Felt like I couldn’t recover after the double sandbags. Going to have to work harder on my carries.

As always my favorite part of Spartan races is the camaraderie. Met some awesome Spartans from IG and had some great convos and even got some pics with the Urban Fit team, the gym where I train at. This Super also gave my my 2X Trifecta. Felt really good waking around wearing that around my neck. Going to hang it in my car as a reminder. 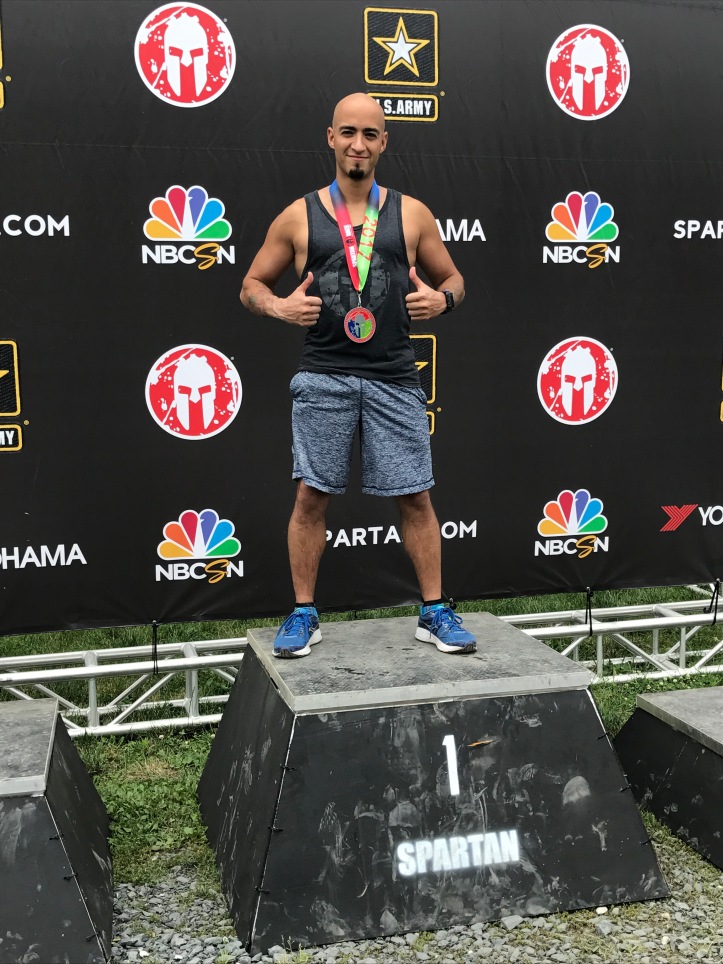 Next week I’ll be back at Blue Mountain running the Sprint. My goal is 2 hours!

Any comments and questions are welcome! Please follow my blog for updates and follow me on IG for pictures of my adventures. AROO!! 🤡👍🏽👍🏽