Every Spartan racer knows that Killington Vermont is the birthplace of the Spartan Beast. It’s considered the toughest Spartan Beast in the United States. The race itself is located on the local skiing resort, and is surrounded by lots of mom and pop restaurants and hotels. The local community embraces the Spartan races, as businesses are very busy that race weekend.

Last year when I raced here, it was my first Spartan Beast race, and it took 7 hours and 11 minutes to complete. So I knew this Mountain was not to be taken lightly. But after a year of training and working on trail running, I felt stronger going into this race. Also because there have been so few Beasts on the east coast, in order to reach my goal of a 5X Trifecta, I was going to have to race the Beast on both Saturday and Sunday.

Luckily I was able to get up to the race site early Friday for the Open House so I could test out a few of the obstacles. The Multi Rig  had several different transitions with rings, a bar, and a baseball all involved. Was able to get through it pretty easily even after several attempts. But I knew of course that was with fresh arms, and since it was at the end of the race, it would be more difficult then.

One thing I didn’t like about the festival area at this race was that everything was very far apart. The bag check and showers were a pretty decent walk away from the actual festival area. I liked it better at other venues when they were closer. I did like that there seemed to be lots of volunteers all over the place. The weather was also unseasonably warm this weekend, which was kind of nice since we all knew there would be a swim involved. 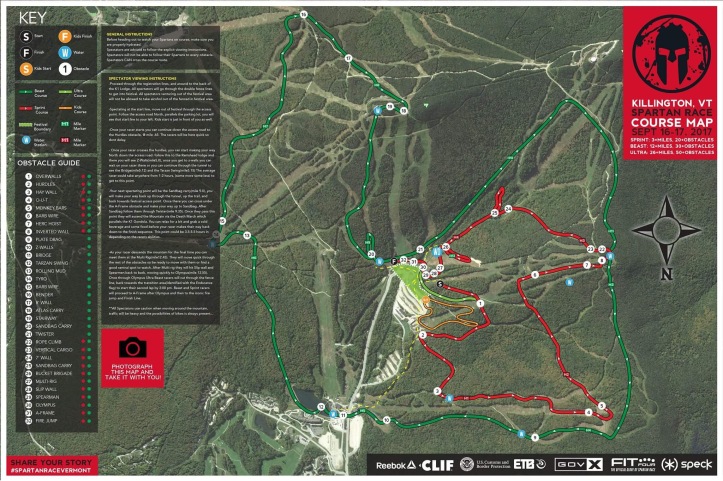 This year they had the start on the mountain going up instead. So it definitely made for a slower start than most races. I was in the 8:15 competitive corral both days. Started off at a decent pace but the pack quickly slowed down from the elevation.

Lots to say about this race so I’m just going to touch on the highlights instead of going over every obstacle.

Monkey Bars was the first “issue.” The initial starting bar was quite high so I had to use the side poles to stand on and reach up. I’ve seen other racers jump up to reach those top bars, but they usually have little success completing the obstacle when they do that. Much harder to gain forward momentum after jumping straight up, plus you’ve expended extra energy just starting on the obstacle. Better to use the sides to your advantage. Anyway I was able to get through it despite it being wet. Having the FitFour gloves helped, as well as taking my time and using 2 hands on each bar.

First Barbed wire was a little rough. The whole thing was uphill so rolling was more difficult. You were pretty much forced to crawl and the wire was very low in some spots even for me.

After a couple other obstacles came the swim. It’s a 3 component obstacle: swims ladder climb, and Tarzan swing. Total of 90 burpees if you opted out of it. This year they made it mandatory that ever racer wear a life vest, and I think that was a good call. The water was ice cold and my left calf started to cramp almost immediately after getting in the water. The vest made it hard to breast stroke so instead I laid on my back and side the backstroke most of the way. Got to the ladder climb and started to pull myself up. The ladder was very slippery and slick. It was very tough to pull myself up to the top. But I finally got up to the Tarzan ropes. Started using 2 hands on each rope and made my way across. Got to the last rope, but the bell on the end was a far reach away. Started rocking back and forth to gain some momentum, swung forward to throw myself towards the bell, but I left too early and missed it. Fell into the water feeling pretty disappointed. Had no success with this obstacle on Sunday either, so despite conquering Ape Hanger twice this year, the Tarzan swing still eludes me. Did my 30 burpees and continued on.

Couple more obstacles than another barbed wire crawl. Very very muddy and low. Had to drag my Camelbak forward with me and it was really muddy by the time I finished.

Bender was next. This obstacle is one of those obstacles that seems easy but is quite tricky. Also seems like someone could easily get hurt. You’re pretty high up when u reach the top and when you flip around, it would be easy to slip off and fall on your back. Luckily that’s never happened to me, I usually just monkey bar it up to the top, than stick my leg on the 2nd highest bar to get myself over.

Another failure for me this race was the 8 foot wall. Just couldn’t get enough height on my jumps to get my hands on the top and pull myself up. Since I raced competitive, I didn’t want to get help, so I did my burpees. 2 failed obstacles now.

1st sandbag carry. This one was on a pretty decent incline that was also quite rocky. They had the bell shaped bags for this one so I took turns switching it between my shoulders as I ascended. On the downhill I carried it in front of me with both arms so as not to exhaust either one of them.

Back in the festival area and at the Twister. Haven’t had issues with this lately and today wasn’t any different. Even Sunday when my arms were very tired, I still took my time and was able to get through it by relying on my grip strength.

Next was the Death March. It is no joke. It’s over a mile of just a climb from the bottom festival area to the summit. On Sunday when I took my camera with me I tried to get pictures of the whole climb but it is such a long hike, that it doesn’t all fit. I don’t know the elevation numbers, but it is a slow climb one step at a time. Had to stop several times just to give my legs a short break.

Finally made it to the top and had to look back and enjoy the view. Also lots of spectators were up there cheering us on, as well as providing candy and water. I never had a better tasting Reese’s peanut butter cup than I did that day!

After a couple more obstacles, plus a run down the hill, there was a 2nd sandbag carry. This one was using the pancake sandbags. It was a straight carry up a slight ascent. Carried it on my back on the way up, then my shoulders on the way back. I knew the bucket carry was next, so I wanted to use my arms as little as possible.

The bucket carry is always my worst obstacle. Takes a lot of energy out of me. This bucket carry was very long, and up a steep and rocky terrain. I had to put the bucket down over and over. When I finally competed it I was completely drained so I took my time walking to the next obstacles.

Because I practiced the multi rig I felt very confident going into that obstacle. Arms were tired but I knew if I took my time I would get through it. Used the knot in the rope as a chance to stand on it and give the arms a small break then kept swinging to ring the bell.

I’ve had a lot of success with the spear lately but this weekend wasn’t good. Missed it both days. So 3 failed obstacles Saturday. Completed Olympus after that, despite the burpees and tired arms. Really happy with my grip strength since even on Saturday with tired arms I was able to get through all the tough grip obstacles.

So I failed 3 obstacles Saturday: Tarzan, 8 foot wall, and Spear. Sunday was 4; I also ended up failing the rope climb. Didn’t use good technique and ended up missing the bell and slipping down the rope.

Finished Saturday with a time of 6:18 which was good for 53rd out of 153 in my age group. So almost a 1 hour improvement over last years time. Very happy with that, and the fact that my training is really paying off.

Killington is definitely a race venue that every Spartan racer needs to check out. It is merciless and will test you harder than any other race. But the beautiful views and awesome local community make for an enjoyable experience. After the bucket carry of course!!

Thanks as always for reading. If you have questions about this post or comments, please message me.  AROO!! 🤡👍🏽👍🏽