Vernon: the end of a season

NJ Super was on my racing calendar as the end of my 2017 season and the completion of my 5X Trifecta.

Woke up and stepped outside around 5am. Was rudely greeted by the cold November wind! It was like 30 degrees out and the wind was blowing pretty hard. But I had a 2 hour drive to the race venue so I figured by the time I got there, the sun would be up, and it would be warmer.

Damn was I wrong. Think it was even colder at Vernon and the wind was joke. Walking into the festival area thinking how I may be not properly prepared for racing in this weather. Was rocking only a tank and shorts, and that was definitely not the right attire in this weather.

Had an 815 start so I wore my hoodie till about 810, then threw it into my bag and rushed into the starting corral. Gave a few high 5s, some AROOs, and we’re off.

Hurdles, walls, than the dunk wall a mile into the race. The water was freaking cold! Got in and out as quickly as possible, didn’t even pose for the camera. Wanted to try to shed the water as quick as possible, but I could feel my hands getting colder.

Gripped the rope and the slip walls and pulled myself over. It was soaked as to be expected. Over some more walls, than the sandbag carry. Was down a pretty descent slope of technical terrain. Not as bad as Blue Mountain but it was still a good challenge. 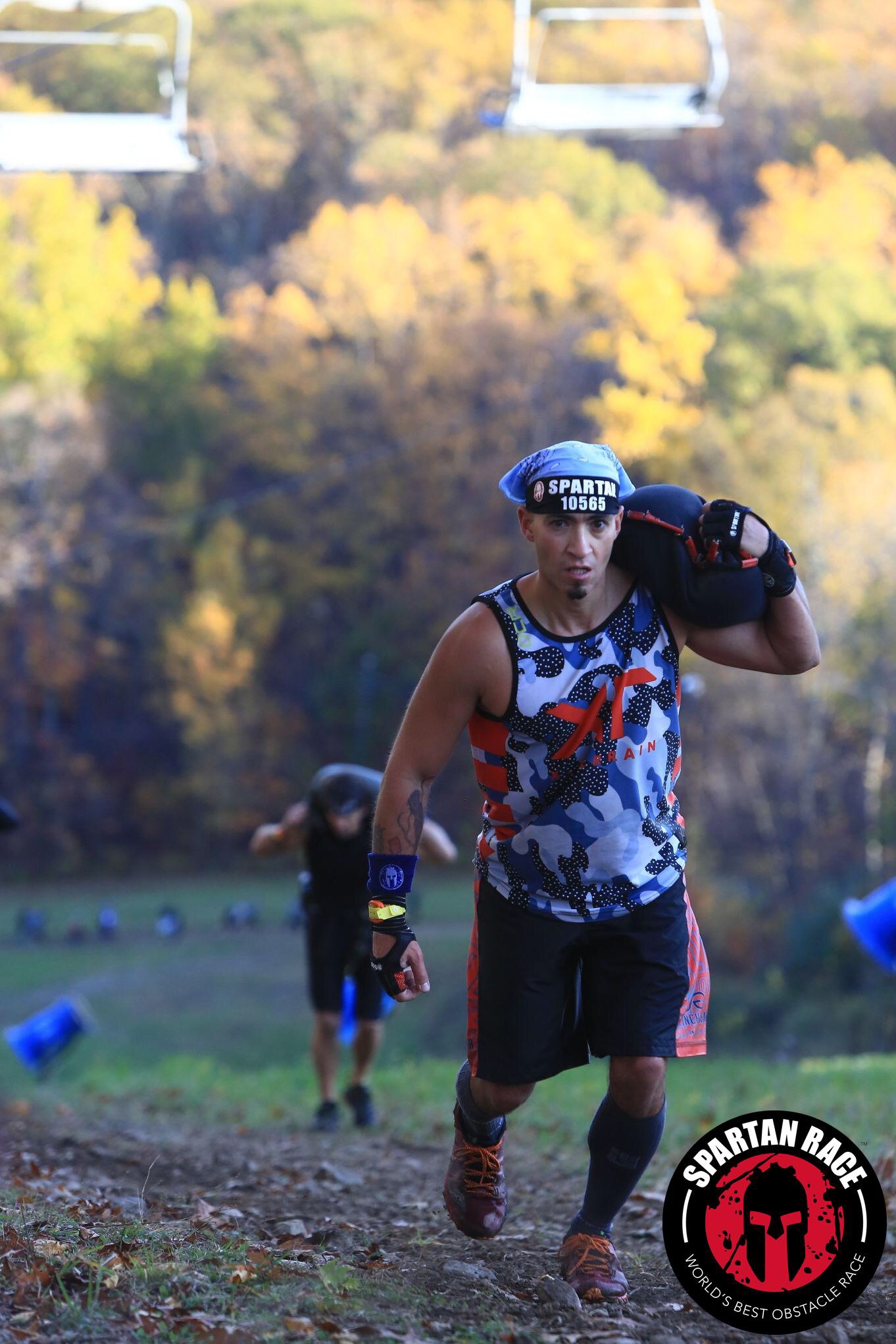 After carries Spartan loves to throw in a grip obstacle and today was no different. Multi-Rig had a couple rings then a long bar, then more rings. Started swinging on the rings using one arm, but I realized that everything was soaked. So I grabbed them with both arms and slid down the pole lengthwise. Transitioned to the rings and rang the bell. 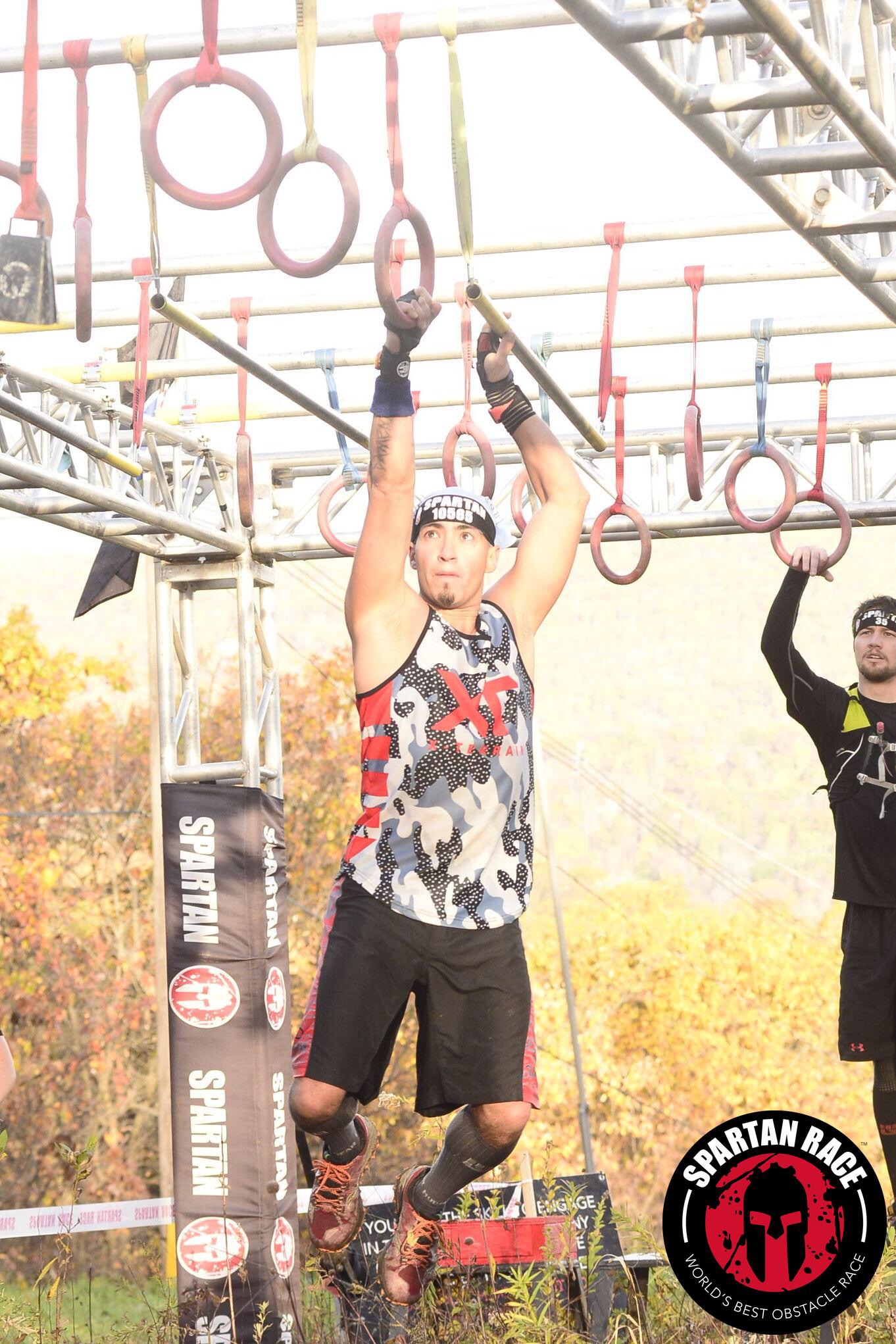 Atlas carry was slippery as hell. Weight wasn’t too bad but had a rough time getting a good grip on it. My hands were so cold, my fingers were swollen. Sucked but I picked it up, did my burpees, and brought it back.

Olympus followed. This is an obstacle I dominate and fly through. But my hands were really having a tough go of it. Plus the wall was super slick and my feet kept slipping down the wall. Several times I felt like I was going to loose my grip, but I was able to power through and keep a hold on the grips. Rang that bell, and felt real good about getting through it.

That good feeling didn’t last. Twister was next. Last time I failed Twister was in the torrential downpour in Massachusetts months ago. Started moving down the rig and I could feel my hands losing their strength. Just getting from one handlebar to the next was a struggle. Got through to the second transition and my hands felt terrible. Got about 3 bars away from the bell and my arms had enough. I physically couldn’t move them to the next bar. Dropped down in defeat and did my 30 burpees. The worst part was seeing all the people who I had ran past earlier, now pass me.

Plate drag was fairly muddy. Slipped dragging it back and and dropped the plate on my foot. Heavy weight on a cold foot. Having a great race! Ugh!

Barbed wire crawl was short and flat. Plus the wires were high so it was a breeze to get through.

Z-Walls were covered in mud and water. Wiped my hands off, and my shoes against the wall. Got real tight to the wall. Practicing my wall workouts helped, even with the mud, and my swollen hands, I was able to get across and ring the bell.

Stairway and then the monkey bars. 2 hands on each bar. No issues getting across them.

Was practicing my form with the spear throw. Made sure my rope was over the wall and ready to throw. Planted my feet, setup my throw, and launched it. It stayed true and stuck in the hay.

A-Frame and Bender were no issue. Very slick but no problems. Herc Hoist was a different problem. Again I couldn’t squeeze my hands hard enough to grip the rope. Was able to lift it almost to the top but it would slip down. Even stepping on the rope didn’t help. I just couldn’t stop losing my grip. All the struggling to lift the bag wore my arms out. Had to finally drop it and admit defeat. 30 more burpees.

Bucket brigade, my nemesis. Was in the same spot as it was during the Beast, but it was shorter in length thankfully. Still had to put the bucket down more times than I could count. But after starting the descent back down, I never put it down once, so I’ll settle for that small victory. Oh and my bucket was full. (just saying.)

8 foot wall was no issue. It was on flat solid ground, so I got a good jump off the ground. Up and over with no problem.

Rope climb. Got about halfway and my hands failed me. Couldn’t grip the rope and I kept slipping down farther then I could pull myself up. Another 30 burpees. 90 total.

My goal time was under 3 hours. After failing 3 obstacles, I crossed the finish line at 3:02. Was definitely a disappointing race. Had I prepared myself gearwise, I may have been able to have a better finish. I know I prepared and trained well enough to do better. Going to have to take this race as a learning experience. 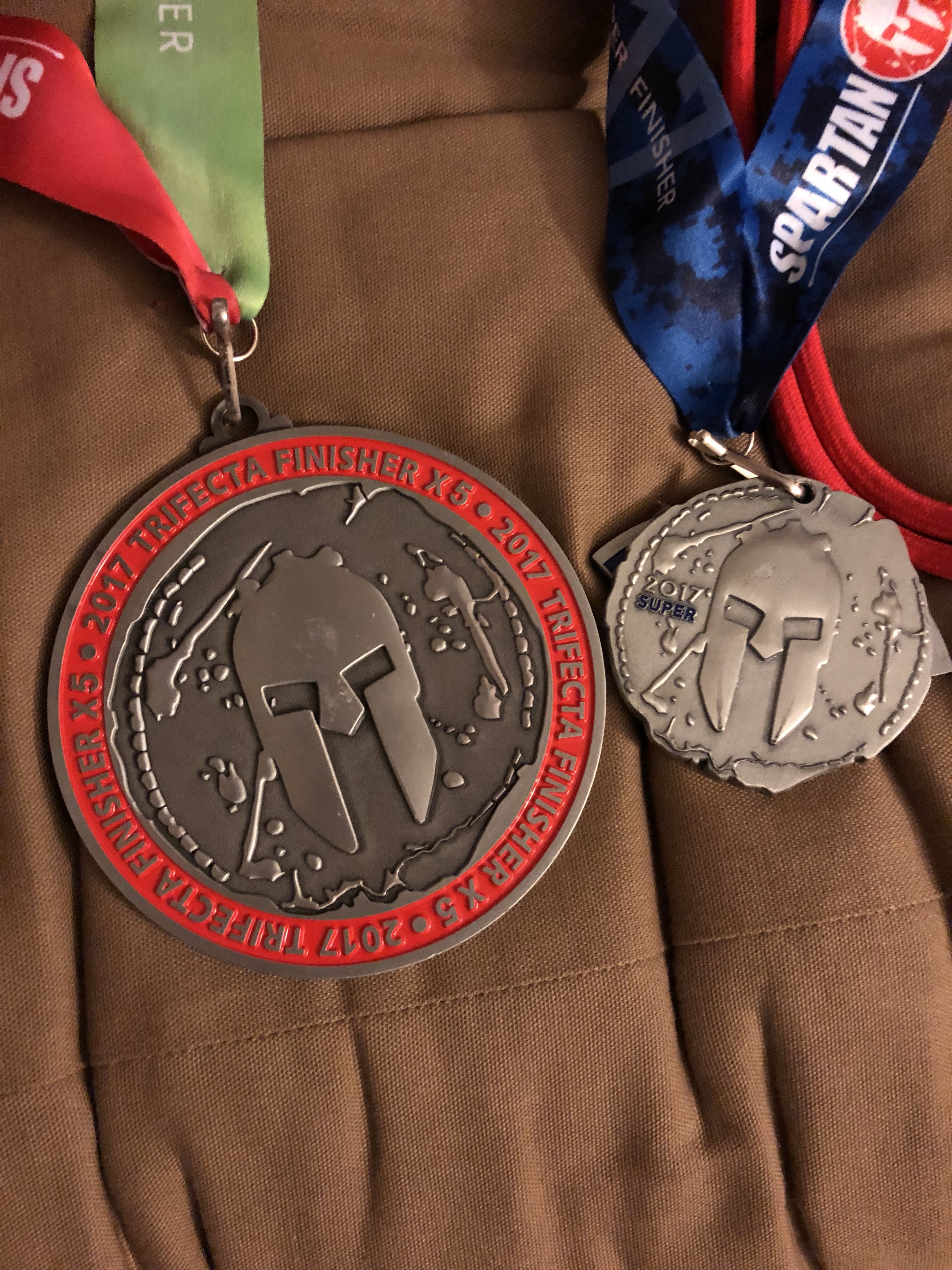 This was the last race of my 2017 season. Going to do a race recap in my next post. Thanks again as always for reading and please share and comments or questions! AROO! 🤡👍🏽👍🏽