So one of the things I was looking to do this year was to get more people involved in doing OCRs. Several of the people that go to my gym had decided to sign up for Savage Race in PA. So I decided I would like to run with the group. Normally I like going alone in the competitive waves to really push myself, but I thought it would be a fun change of pace to race with a couple newbies and offer some guidance. There where varying fitness levels, so I knew everyone would have fun with some obstacles and others might be more challenging. Savage Race is all about getting you wet multiple times and forcing you to do lots of stuff on Multi rigs. There’s no strength obstacles, and one “carry” a 2×4, but it’s so light it’s not a challenge.

Got to the race kinda early only to find out my “teams” time had been bumped back to 12:20. Kinda sucked cause i was waiting around for awhile, I had signed up early so i had a morning start time. But it worked out, I had plenty of people to talk to since it felt like I knew half the people there, and I also found some new people that followed me on IG to talk with. Several people wanted me to do the pull up challenge, but when I was told I had to do 20 to get a shirt, I passed. Wasn’t worth it imo and I wanted to save my arms for the race.

My team showed up, we got everything ready, and then headed into the started corral. I know I was running Open but I was surprised at seeing several people really struggle to get over the starting wall. Good for them for trying though.

The Savage race in Maryland that I had run earlier this year was my first Savage race. I had failed 3 obstacles, so I was looking to conquer those.

Starting ceremonies and then we’re off. My group does a lot of interval training work with some cardio, so we had no problems moving along at a good pace. We all had planned before we started to go at our own pace and then “meet up” at obstacles. This ended up being a good strategy because then everyone could move as quickly as they wanted and yet still cheer each other on. Plus this race was on flat ground, zero hills, so I didn’t think anyone would have any issues.

Did about a mile of running, through a low crawl, then over a wall, then to Shriveled richard aka the ice bath. Now I hate obstacles like this as I don’t feel like it’s an “obstacle”, its just to get you wet. But it was raining and drizzling most of the day, so we were already wet anyway. The first half of the group gets in and didn’t seem to fazed. One person said, “Oh it’s not bad, it’s just muddy water”. So I was pretty relieved by that and I jumped in. THEY LIED!!!! It was ice cold! My body was immediately frozen and I scrambled to get under the wall and out of the pool! Was pretty funny in hindsight but in the moment I was hating the race.

Through the barrels of Squeeze Play, over the Sawhorses, and then to the Slip wall. Lots of people were struggling with this as the ground was quite muddy and the wall very slick from all the racers beforehand. This is one of those obstacles that gets much worse as the race goes on. But we all got up and over without any problems.

Twirly Bird was next. Two handles to swing to, followed by 5 hanging ropes in a row. The trick to this obstacle is to grab the ropes up high, because it’s much dryer on the top. I don’t swing from the ropes, I go sideways. Lost my momentum about halfway through, but I was able to kip back and forth to get going and finish on the other end. Think about half the team ended up falling into the water, which I kinda expected as it can be a real tricky obstacle.

Cargo next, big wall, then Holy Sheet. Tough grip strength obstacle. You have to transposition from basically a horizontal bed “sheet” to 5 metal balls on hanging chains. Got from the sheet to the balls and my left ring finger got caught in the chain as I swung. Twisted it really good. It immediately swelled up but I could tell it wasn’t broken. Couldn’t bend it though. Was able to still hit the bell at the end but I knew this would be an issue the rest of the race. 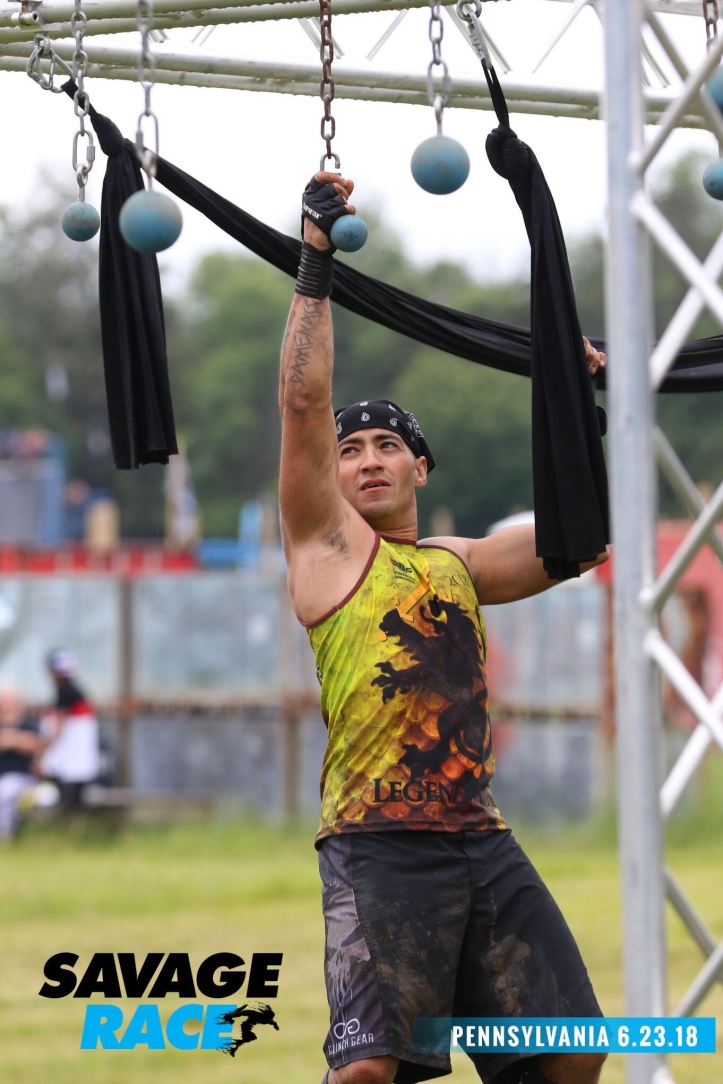 Through some barbed wire and mud. The mud was deep too! We were all covered in it after this. Kiss my Walls was next, a long horizontal wall climb. Because everyone was covered in mud, the grips were really slick. I had failed this one in Maryland so I really wanted redemption. Almost slipped off several times but I was able to get through and get to the bell. Gotta maintain 3 points of contact at all times!

Sawtooth, the long monkey bars followed. Think most of my group made this. The trick is to just go fast so your grip doesn’t have time to give out. Plus when you’re dropping down to the lower bars try not to swing otherwise you might swing off. The hardest part is the middle where you have to pull yourself up to the higher bars. I practice that a lot at the gym because several OCRs like to force you to do that.

Ran through the woods and back to the festival area and Pedal to the Medal. Using your feet only to roll a wheel and drag a tire. Much harder than it sounds. My legs were burning after this!! My group didn’t seem to have many issues, all that extra cardio paying off!

Battering ram followed. I failed this one also in Maryland. Really wanted to get it this time. I was able to make that middle transition but my arms ran out of gas and I fell off. I wanted to try again but my group was moving on so I just kept going. Gonna have to research that one and figure out the “trick” to it.

Another wall and a multi rig. Fun stuff cause it was a mix of rings and ropes and a horizontal bar! This is my favorite stuff. Got to get my inner spider-man going and flew through it.

Went through some tubes, ladder climb, dual warped walls, and then to Davy Jones locker. Climb up a wall then jump off into water. Not really an “obstacle” imo more of just a fun amusement park ride.

Nutsmasher was after that. Long narrow planks that serve as balance beams over water. They were very slick and swaying a lot. Took my time crossing this as I did not want to slip at all! That would be painful. Kinda curious how many people get hurt on this one. It’s actually pretty tough especially when it’s all wet like that.

More walls and barbed wire, then Wheel world. 5 rotating wheels followed by a rope to the other side. Again this was another one I failed in Maryland. So I decided to try something new. I started at one end and kinda ran a little to get my momentum and swung around to the other wheel. I kept that momentum going, not stopping through all five. Reached up for the rope, missed it, but was able to grab it on the second time around! Felt good being able to get that one! Feel like I redeemed myself a lot from the last time.

2×4 carry followed that. Very light carry. Think each of us carried 2 cause they were so light. Up another wall with holes, then to Colossus. It’s a big warped wall with a rope, and then a slide down on the other side. The line for this was LONG! Kinda reminded me why I hate running open. Plus again this isn’t really much of an obstacle. The climb up is tough, sure. But sliding down into a pool? Don’t get me wrong, it’s fun. But I’m not sure the wait was worth it. We must’ve been waiting for like 15-20 minutes.

And that was the end of the race! We all had a blast and most of the first timers were already talking about doing it again. Some people where like me, they’d rather try it competitively, without all the backups at obstacles. A few people didn’t like all the “get wet and muddy for no real reason” obstacles. I kinda agree. I’m not a big fan of that stuff like the ice bath and jumping into water. But to each their own.

It was a ton of fun introducing people to OCRs and kinda showing them the ropes a little. Very different from my normal competitive races. I was able to actually slow down and enjoy the race instead of worrying about my time. Definitely something I plan on throwing into my race schedule from time to time. I do like Savage Race. They put on a great race, although there’s some things I’m not a fan of. But I like how different they are from Spartan, it’s a nice change of pace!

As always, thank you for reading this. I welcome and questions or comments!! 🤡👍🏽👍🏽