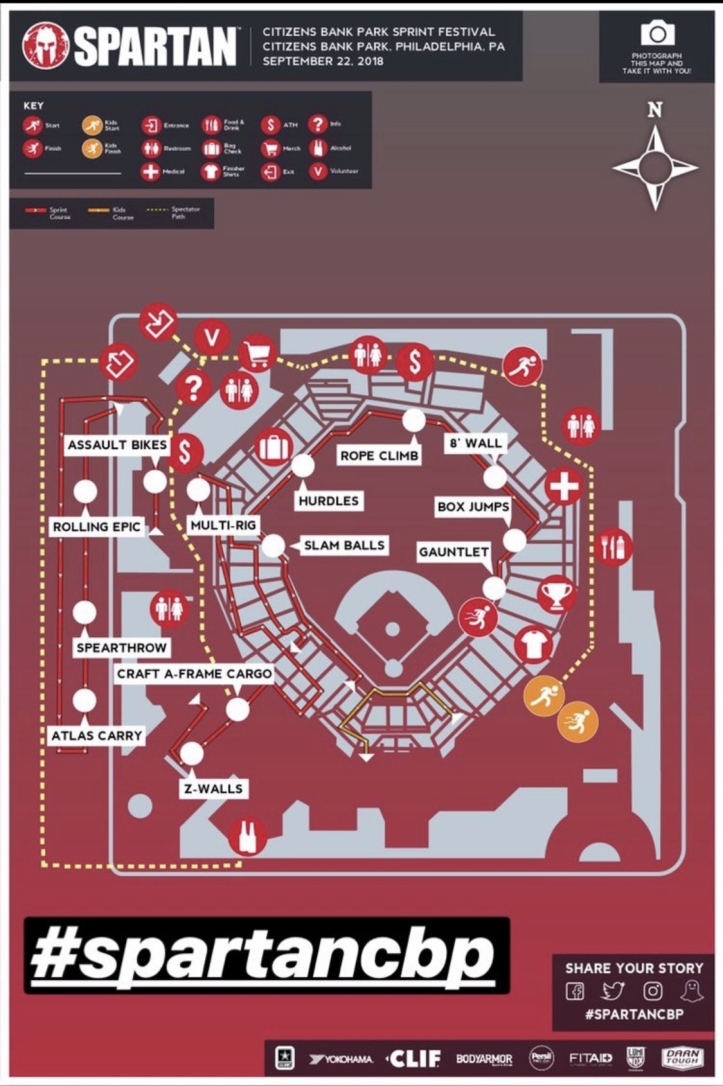 My last Spartan Stadium race for the 2018 season was at Citizens Bank Park in Philadelphia PA. If you haven’t completed a Stadium race before, they are very different from the outdoor Spartan races.

Here are a few key differences

With these things in mind, it’s easy to see why the Stadium races are pretty popular. They’re a great entry point into the world of OCR. You don’t need to buy any real racing equipment, you can race in just regular running shoes with a shirt and shorts. You won’t be getting dirty except for the sweat you work up, so changing afterwards is easy. Plus you’re already in a stadium with tons of bathrooms, so you won’t have to rely on porta-potties. They’re great races for spectators because there’s plenty of seating, they can walk to most obstacles, and the race announcer speaks through the stadium intercom so you don’t miss him calling the action.

One thing to keep in mind when you’re going to a Stadium race: the Stadium will always have their own security on hand. Which means bag checks and metal detectors before you’re allowed to enter the stadium. So I would definitely plan ahead so you don’t miss your start time.

For this race and location I have a few Pros and Cons.

Location – It’s located right off the highway so it’s very easy to get to.

Parking – It’s free! Yes I’m not sure why but whoever owns the stadium doesn’t charge Spartan Racers for parking on race day. So that gives you more money to spend on merch!

Equipment – All of the obstacles had several stations so that allowed racers to keep moving, no one was waiting for their turn. The equipment seemed newer than other Stadium races which was nice. The Atlas stone was actually a medicine ball from Power Systems, which is a good collaboration with Spartan. Several of the obstacles used Power Systems equipment.

Kids race – If you have a kid Spartan, I’ll bet they had a blast at this course. They had Justin Manning doing the starting announcements for the kids, and the Philly Phanatic got involved. From what I heard from other parents, the kids had a great time! Happy Spartan kids means happy Spartan parents.

Short race – So yes I know I said earlier that the Stadium races are short races. However this one was very short. Think it was only 2 and 2/3rds of a mile, maybe even less. Seems like they could have added some distance onto this, especially since the last 5-6 obstacles are right next to each other.

Setup – Some of the booths were kind of hidden. The results area was a desk that wasn’t marked so I walked past it several times. Having clear markings would have been helpful.

Extra lap sign up – So because this race is very short, a lot of season pass holders like to run multiple laps at these races. However, Spartan requires you to run your first race, then walk back to registration each time for each individual lap. Well who wants to go through security and metal detectors several times? Especially since they can get really backed up. Spartan sells the ability to run multiple laps to Season pass holders as a perk, so they should try to make it a little easier to use.

Merch – The merch tent was very limited. There was a small amount of products to purchase. None of the Craft gear was there at all.

As far as the race itself, I had a lot of fun, but due to the short distance it wasn’t as challenging as some of the other Stadium races. They started us off running up several flights of stairs and the first obstacle was the sandbag carry. I thought this was a great idea because it separated people very quickly and helped prevent logjams. They again used the long sandbag tubes, so it appears Spartan is getting away from the pancake sandbags they had before.

The water jugs is also another obstacle that can get backed up and this year they had it on a wide open ramp, so that prevented racers any congestion.

The Multi-Rig was in clear view of the spectators and that’s always a fan favorite. Also the Assault Bikes was viewable as well, you could actually get close enough to high-five the racers. This allowed for a lot of cheering and encouragement from the crowds.

The racers weren’t on the outside of the stadium very much, which contributed to the short distance. But when they were, it was right in front of the entrance, which again allowed for some good views and gave the spectators plenty of chance to cheer for racers.

The free race beers were dispensed at McFaddens. It was a can of Bud Light, so nothing to write home about. The bar ended up getting really backed up they stopped taking food orders for a while. Guess they didn’t expect hundreds of hungry Spartans?

Thank you for reading my race review. If you have any questions about this or any other race, please message me or leave a comment below!