Race weekend again down in Virginia. This weekends races were located in Arrington at the Infinity Downs venue. This venue is a combination of local farmland, as well as horse shows. So because of this the race course was very flat with minimal elevation. This location is a trail runners dream. But just because it’s flat, doesn’t mean it is an easy course. Spartan always finds ways to make it difficult. Also Mother Nature always likes to have her hands in it.

One thing to be aware of for this location is it’s very remote. Most of us who stayed in hotels were 30 to 60 minutes from the venue location. So you want to plan accordingly on race day.

The parking for this location is great. The site is used for numerous shows and fairs, so it’s setup very well for mass parking. Also the venue entrance is located right next to the parking so it was a quick walk in. There was security from the venue also on hand, so you couldn’t just walk in. Never seen that at a race before.

The highlight of the venue was the huge merch tent. It covered all the Spartan merch books and even the display stands. It was a great place to be since it rained several times during the weekend. Plus there was lots of different merch available for sale, even some of the new Craft gear.

Only 1 food vendor was a little bit of a bummer, but they made very good tacos and burritos. They even had vegan options so that was cool to see. Still, it would have been nice to have more food options. The finisher beer was a local cider from Bold Rock. They had several different flavor options, and they were quite good. Much better than the normal Bud light we get at races.

However, this wasn’t a great venue for spectators. Besides the Start and Finish lines, the only obstacles the spectators could see from the venue was the Barbed Wire Crawl, which was then followed by Monkey Bars. That was it until the racers crossed the finish line, and those two obstacles were in the very beginning and were back to back. If the spectators were feeling adventurous, they could walk down the hill a ways towards the Spear Throw, and then a little farther for the Multi Rig. But that was it and those obstacles weren’t close by.

So as I said before, this location is definitely ideal for tail runners with its lack of elevation. The setup for this race was very good and challenging. They did a great job putting obstacles like a carry right before a grip intensive one. For example they did the Bucket Brigade, then Olympus, then Sandbag carry all in a row. So they wore you out pretty quickly with certain obstacle combinations. Also they used the terrain to make obstacles harder. Before you did Olympus, you had to walk through a muddy creek. Which then made Olympus much more challenging. The trails were technical, but pretty well cleared. Also they were wide, so it made passing pretty easy and prevented logjams.

Having Spear Throw at the end was pretty diabolical. I wonder how many podium dreams that obstacle crushed. The Multi Rig for Sunday used a combination of a tight short rope followed by a shredded shirt rope on the Rig. They were back to back so you couldn’t skip them. Was a nice challenge. Also Twister was back to being 3 sections, and it was in the woods so very slippery. That obstacle had a lot of competitive racers in the burpee pit.

One of my favorite things they did with this race was the location of the finish line. It was at the top of the hill in the venue. But when you were racing it was hard to tell where you were in relation to the finish. So when you turned this corner and looked up the hill, all of a sudden you saw the finish line. Not sure how it was for other racers, but there were several other racers around me and I think we all saw the finish line at the same time. So all of a sudden we went from jogging to sprinting up this mountain. No one wanted to let anyone pass and we were all pushing hard! The crowd being so close by also made it very exciting, and it was probably my favorite finish of the year!

Also kudos to Spartan for having lots of officials out on the course. I was nowhere near the top 20 AG racers, especially at the end of the race, but officials were still out there yelling burpee instructions and enforcing the rules  I like it!

I had very few issues with this race weekend. My biggest Cons had to do with the venue. Only one food vendor is a bummer, especially since the nearest place to get food was a pretty decent drive. The lack of obstacles for the spectators gave them very little reason to stick around.

The A Frame cargo net was extremely loose even on Saturday. On Sunday you were practically climbing straight down, that’s how loose the net was. That’s something that must have been missed, because it was pretty obvious.

The mud pits were also surprisingly low with water. By the time the Open waves were coming through the Dunk Wall, they were able to go under the wall without submerging themselves and the water was only to their knees. Also Rolling mud had very little mud, you could walk through it without your feet getting covered. Makes me think maybe there was an issue getting water pumped in. 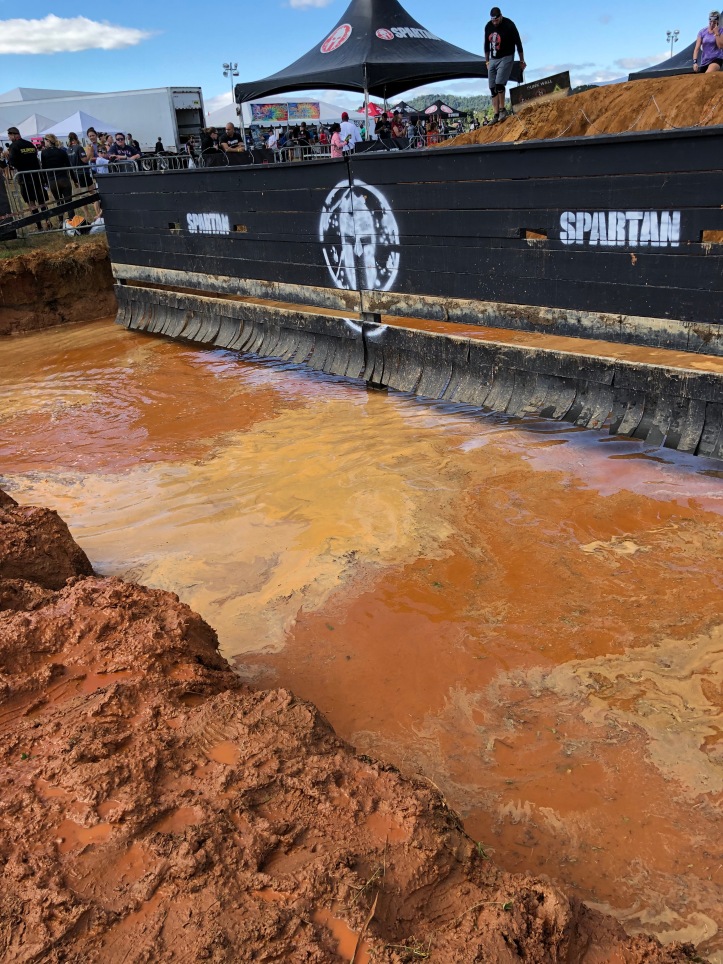 The Trail racers got a special number Junk Brands headband, as well as a Trail Race Finisher shirt.

Also, I didn’t run the Trail Race, but several people complained that they got lost because there weren’t enough course markings. Hopefully this gets addressed in future races. From what I heard from a race director, the plan is to have 12 Trail races in 2019. Also they were handing out free Trail Runner magazines when you left the venue. So I’m excited for this new racing option for 2019.

Thanks as always for your support and for reading my race review. If you have questions or comments, please message me!